Taking the "Pre" out of Pre-School? 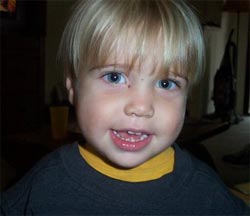 If you live in California, you must have noticed the increasingly varied ad campaign promoting preschool attendance. During the summer, one of the most common ads depicted two cops shooting the breeze inside their black & white, citing youth crime and dropout statistics, then smiling in unison as they turn to the camera and chime that preschool can solve everything.

A Rand study was published last week, asserting that for every dollar spent in California on preschool education, the state will yield $2.62 in returns. Funded by the David and Lucile Packard Foundation (David Packard was co-founder of tech giant Hewlett-Packard), Rand used 2001 data generated by Arthur J. Reynolds' study of a comprehensive, multi-year preschool support program in Chicago. Rand extrapolated Reynolds' findings and applied them to each region of California.

...is preschool just an earlier opportunity to make kids test and assessment ready, training them for a lifetime of giving the right answers?

Meanwhile, there had already been a steady drumbeat of new advertisements, specifically three you've probably seen. A boy races through crowded city streets as if running away from committing petty theft, but he's really running to the line for his diploma as a voice-over describes how he "might be a little late" but he'll definitely "get there" if he goes to preschool. A no-nonsense white principal strides shiny hallways of her high school, declaring how all her problems--we imagine poor test scores, fighting, tardiness, drop-outs--will be solved if kids just go to preschool. More subtly, an Hispanic father and toddler daughter take clothes from the laundry bin, as a voice-over narrates how this moment can be an opportunity for "a lesson" on colors and counting.

What could possibly be problematic in the sudden push? As with most things in education-related sound bytes and marketing lately, questions about motive cannot be underestimated. Do we view pre-school as an opportunity for toddlers to learn social skills, play with each other, create with clay and paint, listen to stories, sing, eat, and have free access to a rich "print environment" with books and letter blocks? Or is preschool just an earlier opportunity to make kids test and assessment ready, training them for a lifetime of giving the right answers? Is it possible that the latter motivation might easily exploit the former?

This distinction has just been raised in an open letter recently published by members of the Alliance for Childhood. As with No Child Left Behind legislation, politicians and business interests continue to employ the rhetoric of child-concern to fortify a more reductive view of education as "workplace training." More taxpayers--parents and teachers--must examine these conflicts and raise questions in their local communities.

...Man of the Year Bill Gates may pay lipservice to the dead "assembly-line" model of education, but the white collar obedience model isn't much better; everybody's hands just look a little less grimy at the end of the day.

The push for preschool is not just a recent idea, and it's not purely a California phenomenon. At the 2005 Association of Test Publishers (ATP) conference, coming off the meeting of the National Governors Association (NGA) in February, P-16 alignment was all the rage. P-16 alignment argues that all students, from preschool through university, should be on the same track of standardization to job-readiness and economic productivity. Documents from the NGA on the subject emphasize the need for government involvement--whether compulsory or voluntary remains a question--to make a transition "seamless," literally between birth and school attendance. And how do we know if students are "ready" for anything now? We test them.

Certainly no one can argue against being prepared for a job, but the question again becomes how students are trained to work, for whom they are working, what students will learn to expect from themselves and other people, and how they will be rewarded. Consider corporate guts in retirement and health benefit funding, outsourcing, the Wal-Mart effect. Do we want our young people to know when they're being handed a raw deal? If there's no bubble form for them to fill out for injustice, will they know how to speak up? The public doublespeak among business leaders like Man of the Year Bill Gates may pay lipservice to the dead "assembly-line" model of education, but the white collar obedience model isn't much better; everybody's hands just look a little less grimy at the end of the day.

Just a few social and economic elements/elephants in the room when we talk about preschool: poverty and lack of childcare, a general mistrust of parents, the low-level education and low professional status of teachers (mostly women) who work with our youngest children, and a tide of immigrant students who may or may not be literate in their primary languages.

How might we change the tenor of the conversation about early-childhood education so that we don't construct it as merely an antidote to crime and low test scores? What if, for example, we expanded funding to libraries, which provide free-standing access to reading materials that parents and children can choose together? Historically, access to books (not compulsory schooling) has been the key political empowerment issue: Stephen Douglas and Malcolm X write about how reading and writing changed their lives; early feminists crusaded for the right of women to be able to read and study as much as men. Just six years ago, Stephen Krashen studied the correlation between student success and book availability in Beverly Hills, Watts and Compton communities--not simply in school classrooms, but school and community libraries, bookstores and homes.

If we raise children who are curious, who read, write, think and ask questions, they'll be able to read between the sound-bytes. Sadly, perhaps this is the very reason that "preschool" and not "literacy" is the new political buzz.

A recovering California teacher in voluntary exile, Jo Scott-Coe was 2003-05 Fellow in UC Riverside's MFA program of Creative Writing. She is author of six poetry chapbooks, most recently Even My Happy Shoes (2003) and Ethan Frome Damage (2004). Her poetry and nonfiction have appeared in publications such as ONTHEBUS, The Chariton Review, Chiron Review, Pearl, Nerve Cowboy, Rattle, KB Journal and The Los Angeles Times. The title essay of her essay collection, Teaching at Point Blank, won an honorable mention in the 2005 New Letters Literary Awards. She is a weekly journalistic contributor to "HorseSense and Nonsense in Education," and her writings can also be found on websites of researchers Peter Sacks and Susan Ohanian. Scott-Coe is currently a lecturer in creative writing at UC Riverside.