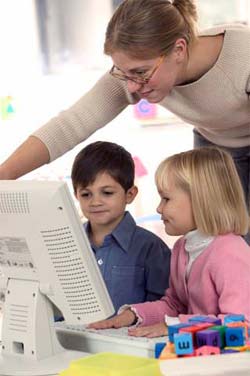 When is recess?
The Alliance for Childhood is gravely concerned about the newly proposed "common core standards"

Please read the message from the Alliance for Childhood pasted below, and if you agree with their position, please take action NOW to stop the new K-3 core standards that are detrimental to young children.

Frankly, I hold the position that the new core standards for all grades is more of the same government "No Child Left Behind" nonsense under a new moniker "Race to the Top" that will kill the love of learning in future generations — just as it has with past generations. It's all tied to accountability through testing, meaning schools teach to the test and ignore how children learn best.

But most importantly to me, the inappropriate push for stressful academics in young grades will trickle down and result in harmful preschool practices that result in learning disabilities and impaired social and emotional behavior. These standards ignore the important developmental need for learning through play.

I urge you to help stop this madness. Follow the directions in the message below. Thank you.

Follow the directions in the message below. Thank you.

As many of you know, the Alliance for Childhood is gravely concerned about the newly proposed "common core standards" for children in kindergarten and the early grades. Hundreds of early childhood health and education professionals have signed the Alliance's joint statement on the K-3 standards calling for their withdrawal. Now is the time for each of you to take action on this critical issue.

After months of drafting in secrecy, the final proposed version of the K-12 standards was released by the National Governors Association (NGA) and the Council of Chief State School Officers (CCSSO) on March 10. Some aspects of this version are better than the draft that was leaked to the press in January; some are worse. But overall we are sure these standards will intensify an already inappropriate emphasis on cognitive development of young children that is divorced from social-emotional and physical development. Current practices are already causing enormous stress in children's lives. These new standards will add to that.

The NGA and CCSSO have announced that the proposed standards are "available for comment" until April 2, after which they will revise the standards and issue the final version. Unfortunately, this is not a true public comment process, such as would be required for an important piece of legislation moving through Congress. Yet the federal government has announced that billions of tax dollars—including "Race to the Top" and Title I education funds—will be tied to states' adopting these standards. We are deeply troubled by this entire process.

The NGA and CCSSO have set up an online survey to collect comments. The survey is rather confusing. Here are the steps you need to take to ask that the early childhood standards be withdrawn and reconsidered:

It is vital that you submit comments and get friends and colleagues to do the same. It's a small window of time between now and April 2, but the biggest one Americans have had yet to speak out about the need for strong, experiential, play-based approaches to early education. Use the boxes for "additional comments" in the questionnaire to inform policymakers about your own experiences and concerns about early education.

See the Alliance web site, www.allianceforchildhood.org, to read our statement on the standards, the comments of many of the signers, and more details on how you can respond. Policymakers need to hear from us all, especially parents and teachers. Their voices are rarely heard on educational issues. It's time to act.

P.S.: Please forward this message to others.