Why You Should be Concerned about So-Called "Preschool" Legislation 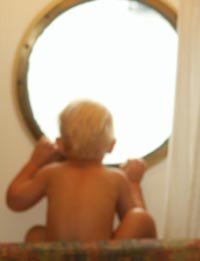 Note: This piece originally ran as a "Letter to the Editor" in the Sept-Oct 2005 issue of Home Education Magazine.

Recently my youngest became 18; he's legally an adult. Our lifestyle of learning continues, but concerns about how to deal with the government education establishment are forever over. In a big sense, the pressure's off. As a parent, I've graduated!

It's common upon one's graduation to have a few things to say, and to make plans for the future, so I thought I'd write in. Oddly enough, at this time when American society says I can just forget all about taking care of annoying, messy little children and "get a life" -- it's toddlers and wee ones I'm becoming most concerned about.

At about the time that my son turned 18, and while I was still breathing a sigh of relief and thinking about a few years off (yeah, daydreaming...) -- author Diane Flynn Keith announced a new website, UniversalPreschool.com. Diane has a big heart for mentoring parents of the wee, vulnerable ones in our society. It's something I also have a heart for. Universal Preschool is basically about the how's and why's of homeschooling the very young.

Who? The very young?

Why is this necessary? Below the age of compulsory education, aren't parents free to do as they choose?

If as a new 'graduate' I could only say one thing to you, I'd say: "Look deeper."

I have been a top-notch student since I entered first grade in 1958, and I do learn what I'm taught. In my 30's, frustrated that my church and husband had no confidence in me to teach my own children, I went back to college and became a professionally licensed teacher, and then earned my M.Ed. with administrator credentials. I work well within multiple styles and methods.

The inconsistencies I have seen and heard in institutions have boggled my mind. So often in life and in my coursework, I have heard wonderful rhetoric, grand ideas based solidly on research, and have seen policies carefully crafted to bring about learning and positive change. So, then what happens after that?

There's a reason for the failure of educational systems but I'll get to that in a minute.

If the road to hell is paved with good intentions, then the lines down the middle are painted with doublespeak. Look deeper. If the people and motivations seem well-meaning, then ask, "Do the details fit the larger scheme of things?" Often, sadly, they do not!

The education systems are doomed to fail because they are based on a disproven philosophy.

When the townspeople lined up to view The Emperor's grand new royal gear, they were told that anyone who could not see it was incompetent. According to the story, a child, honest and expressive, stated what was obvious to all. The fairy tale is very much about our common human tendencies -- we are subject to authorities, we need to survive, we want respect; most want to fit in. It's not an ancient childish story -- it's true today and it tells us to both trust our own perceptions and to listen to the children.

On Education Revolution alternative educator Jerry Mintz lists "Ten Signs that You Need to Find a Different Kind of Education for Your Child". Read them. If your toddler doesn't have any of those problems, I suggest you 'don't fix what ain't broke'. Listen to your child's joy!

Along this vein: thank you, HEM, for keeping older articles on your website. The July-August 1997 article, "Homeschoolers and the 'I Am Your Child' Campaign" ("Taking Charge" column by Larry and Susan Kaseman) is right to this point. The Kasemans sagely warned of a national campaign which, "focuses on scientific research on brain development and on specific things parents can do to help their children grow and develop (but) fails to state clearly how important it is for parents to be with their children and overlooks the significant obstacles that prevent parents and children from being together."

This "I Am Your Child" is still around, gathering momentum under a new title, and driven by a man named Rob Reiner who has gained considerable fame (and possibly fortune) by promoting ideas and legislation. His web site seems to be saying that he is so delighted with being a father that he wants everyone to have day cares and preschools, so that they can leave their children with someone else and go off to work.

Isn't it all based on science? What happened here?

In 1996 I read an insightful work by Canadian author and professor Paula J. Caplan about the political motivations and poor research methodology behind a number of 'mental disorder' categories. (They Say You're Crazy C 1995).

She convinced me and I've since recommended this book to anyone who lives with people. I began to look deeper when I read of scientific studies. Just recently I have been reading news of many falsely reported research outcomes.

Also in teachers' college, I heard often that educators wanted to have the respect (and salaries) of scientific professionals. Hmm.. Science. Learning. What's the connection?

As we all know, modern science is operating on facts and principles which have been discovered throughout history. One newer theory termed "Chaos" is concisely described in a little online (free) course at http://order.ph.utexas.edu/chaos/ -- explaining that new scientific understandings of complex physical systems have undermined the philosophy of determinism which had been the foundation of science for ages! Determinism assumes that "every cause has a unique effect, and vice versa." With a deterministic mindset, everything can be explained and controlled. Initial conditions may be set up to cause exact future occurrences; and past and future occurrences may be exactly explained, simply by known formulas of cause and effect. This, I repeat, has been discovered to be not true.

Now, if this is not true about physical systems, how can it possibly be true of social/educational human systems, which are infinitely more complex?

Simply put, it can't. The education systems are doomed to fail because they are based on a disproven philosophy. You just can't set up conditions that predict and control the learning of dozens, much less millions, of children!

When I think of No Child Left Behind I think of another fairy tale, The Pied Piper. Mesmerized by the sound of a stranger's music, all the children followed and no child was left behind. What was left behind was a lot of very sad, lonely parents! I think of doublespeak and false scientific explanations as the piper's tune. Please, leave my child behind!

So, why should we be concerned about legislation pending in several states to lower the compulsory school age, or to institute government-funded "Preschool for all"?